Imagine going to a new school and not knowing anything about where to go or who to talk to. This is the case with many high school freshmen. The transition from middle school to high school is easier for Murrieta Valley High School (MVHS) band and color guard students because they have the benefit of having over 120 friends to help them through the process. 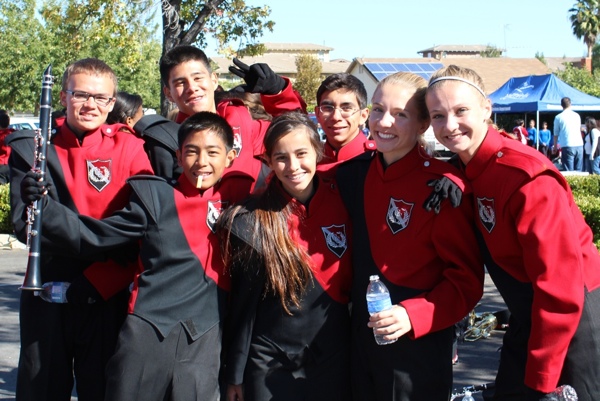 Incoming band freshmen have immediate contact with upperclassmen, in a big brother / sister kind of way. High school band is very healthy for students in a multitude of ways.

WHAT ARE THE BENEFITS OF MUSIC?

It is a known fact that high school band students represent the top of the academic scale in our schools. We know that band students average 62 points higher on SAT tests, which would indicate they are stronger in verbal and math scores than other members of the student body. We also know band students are students who enjoy a successful high school career, go on to college, and become leaders in our society. There is a clear link between the top achiever academically and the band student. They are one and the same.

According to “In the Arts: An Essential Ingredient in Education”, by J. Buchen Milley, “research shows that when arts are included in the student’s curriculum, reading, writing and math scores improve.” Music has a profound effect on the academic success of the student.

Band is a group effort. Members are required to shift from an I/Me perspective to a We/Us outlook. This means extending oneself beyond the normal considerations of much of our day-to-day living. Instead of the logic being “What’s in it for me”, it becomes “What’s in it for us?” The values of cooperation, communication, concentration, correlation, and completion come into play at each rehearsal and performance.

Band builds a sense of self worth. Although our team (band) is like athletic teams in many ways, band is a place for everyone. Rarely is a person serving as an alternate or substitute. Everyone in the MVHS band plays a starting role!!

Music is one of the few academic disciplines that requires the student to master skills and apply them in performance. In other words, music involves multiple forms of learning.

• Students of music continue to outperform their non-arts peers on the SAT, according to reports by the College Entrance Examination Board. In 2006, SAT takers with coursework / experience in music performance scored 57 points higher on the verbal portion of the test and 43 points higher on the math portion than students with no coursework or experience in the arts. – The College Board of College-Bound Seniors National Report for 2006

• Nearly 100% of past winners in the prestigious Siemens Westinghouse Competition in Math, Science, and Technology (for high school students) play one or more musical instruments. This led the Siemens Foundation to host a recital at Carnegie Hall in 2004, featuring some of these young people, after which a panel of experts debated the nature of the apparent science/music link. – The Midland Chemist (American Chemical Society) Vol. 42, No. 1, February 2005.

• Secondary students who participated in band or orchestra reported the lowest lifetime and current use of all substances (alcohol, tobacco, illicit drugs). – Texas Commission on Drug and Alcohol Abuse Reports. Reported in Houston Chronicle, January 1998.

HOW GOOD DO I HAVE TO BE?

ALL students are admitted into the MVHS band program regardless of skill or experience level. Yes, even beginners.…We take everyone!